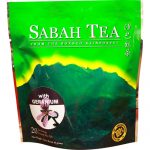 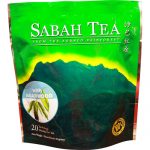 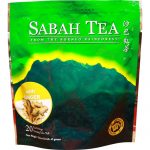 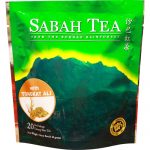 There are 8 variations of the tea package and each variation serves different purposes depending on the ingredient added to it.

Amazing Agarwood: Tea made from Agarwood leaves is rich in flavonoids which helps the body eliminate fat. It naturally improves body metabolism and contributes to a sense of general well-being. Agarwood tea is consumed for weight loss and as a detoxifying agent. It has a sweet, deep, and balanced fragrance.

Classical Cinnamon: The Sabah Exotic Tea with Cinnamon is an absolute delight with biscuits or when simply drunk by itself. Cinnamon is an Asian spice known for its many health benefits, such as regulating blood sugar levels and treating diarrhea. It is mildly carminative and is used to treat nausea and flatulence. We suggest one to add a little honey for an additional boost of taste and quality.

Glamorous Cinnamon: This range is an exotic blend of Sabah Tea with gorgeous Geranium flowers. Geranium is typically thought to promote calmness and has positive effects on the female reproductive system. The Glamorous Geranium Tea is also known to help bring cheer to those who drink it. Hence, it is claimed to be beneficial for adults who are prone to have symptoms of being worried.

Guardian Ginger Tea: This Sabah Exotic Tea with Ginger is another variety of this tea range. The ginger in the tea gives the tea a slightly strong taste and smell. Ginger or the Guardian as it is fondly called is useful in both preventing and treating various types of ailments, from runny nose and the common flu to increasing immunity. The Guardian Ginger Tea is well known for its medicinal values in maintaining the well-being of the human body.

Lovely Lemongrass : One of the newly introduced Sabah Tea Exotic blends is with Lemongrass. Lemongrass or Citronella grass (Serai in Malay) is a tall perennial grass that is widely used as a herb in Asian cooking such as in making teas, soups, and curries, and for flavouring meat and seafood. It has a pleasant citrus flavour. Research shows that Lemongrass oil has anti-fungal properties and its molecule has anti-cancer properties.

Magnificent “Misai Kucing”: Another new addition to the exotic Sabah Tea blend is the Misai Kucing, the Malay word for “Cat’s Whiskers”. But no worries, these are not really Cat Whiskers that we are mixing in our tea., but a traditional herb known as Orthosiphon stamineus in English. This herb is widely grown in Southeast Asia and is popularly consumed as herbal tea. Herbalists believe that ‘Misai Kucing’ is good for addressing cholesterol, high blood pressure, kidney, and urinary problems since it has diuretic properties.

Pacifying Pandan: The next flavour under the Sabah Exotic Tea range is the Pacifying Pandan, where our tea leaves are blended with Pandan leaves, which produces the most beautiful smell. Pandan leaves are commonly used in food preparation in Asia, for their fragrance. Pandan, when taken in moderation can help with heart ailments. Regular intake of this plant in moderation is able to prevent stroke and has diuretic functions (promote urination).

Tantalizing Tongkat Ali: Tongkat Ali is a plant grown in Malaysia and is commonly used to help the male libido as well as in treating Hypertension. The high level of SOD (Superoxide Dismutase) helps as an anti-oxidant enzyme to help rid free radicals in our body. With this range of tea, one will be able to enjoy a sip of Sabah Tea while enjoying the goodness of Tongkat Ali.